What power cord is used in the Philippines?

Is the Japanese plug the same as the US NEMA style?

Yes, the plug has the same pin configuration, but Japan has their own approval agency (PSE).  In addition, the cable type is a different standard and the complete power cord must be approved by PSE.

Does Japan have a hospital grade or medical grade plug?

Is the Taiwanese plug the same as the US NEMA style?

Yes, the plug has the same pin configuration but, Taiwan has their own approval agency.  In addition, the cable type is a different standard and the complete power cord must be approved by BSMI – the Taiwanese testing agency. All power cord products to be used within Taiwan are required to have the new BSMI certification and mark. The BSMI mark (see below) is issued by the Bureau of Standards, Metrology and Inspection of the Ministry of Economic Affairs in Taiwan.

Is the US NEMA plug used in Thailand?

Thailand had a hodgepodge of different plugs used, one of which was the NEMA standard N5/15.  The new plug standard TIS 166-2549 is now required and must carry the TIS approval.  This plug is unique to Thailand and not used in any other country.

What agency approves the Australian plug?

The Australian plug can be approved by one of five state agencies.  The standard plug is 10A/250V rated, but 15A and 20A models are available. Australian standard AS/NZS 3112 has been updated and as of April 3, 2005 requires the use of insulated line and neutral pins.

Is there a hospital grade or medical grade plug required in Australia/New Zealand?

For hospital applications, a clear plug is recommended, but not required.

Can I use Continental European plugs in South Korea?

The South Korean plug standard mirrors the Continental European plug, except that it requires the KC approval mark (shown here). The cable type has been revised from the Japanese standard of the past to the European cable nomenclature.  It is possible to have one cord approved both by KC and a European agency.

Is the Chinese plug the same as Australia?

The Chinese plug standard GB 2099.1, GB 1002 was based on the Australian AS/NZS 3112, but has slightly longer pins and does not require the line and neutral pins to be insulated.  Each plug carries a unique approval marking and they cannot be used interchangeably.

Is the same plug used in South Africa and India?

The India plug is per IS1293, which is based on the old British standard. BIS approval is now required on the plug and the internal color code is now Black, Red, Green/Yellow, making it impossible to have one cord approved for both India and S. Africa.

What plug is used in Singapore?

The British fused plug standard is used in Singapore, but the PSB Spring Mark is required.   British plugs must be approved by ASTA or BSI for the UK.  It is possible to have one plug approved for both destinations.  In addition, MEGA has the G-Mark for Low-Voltage Electrical products which is regulated by the Gulf Technical Regulation for Low-Voltage Electrical Equipment and Appliances (BD-142004-01) and is required for products shipped to the UAE, Baharain, Qatar, Kuwait, and Oman and Saudi Arabia.

Is Chinese cable the same as European cable for power cords?

China has developed their own cable nomenclature, but the cable is measured in cross section sizes similar to all European cable. All approved Chinese cable is required to be approved with the CCC (Chinese Compulsory Certification) marking.  Below is a cross reference conversion chart from CCC standards to European.

Does MEGA stock cords to cover all of the Asian countries?

If you have any questions about Asian export requirements, please give us call at 732-249-2656. 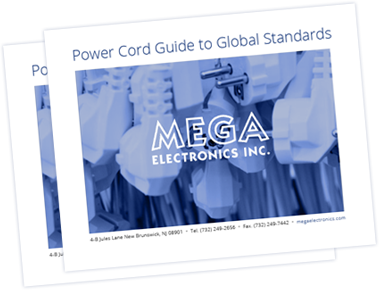 We are preferred partner for commercial and industrial use Power Supplies and Cords. Products include wall mount, desktop, DIN rail and open frame power supplies.

Customers can feel confident in relying on our expert international approval knowledge. All of our products carry relevant global standards.

We are dedicated to providing you with world-class engineering support. For over 20 years, we have specialized in custom solutions that bring power to the products you manufacture.

Our US-located warehouse offers common products for around the world from stock. To maximize our efficiency, we support VMI, JIT and KANBAN services.

We use cookies on our website to give you the most relevant experience by remembering your preferences and repeat visits. By clicking “Accept”, you consent to the use of ALL the cookies.
Do not sell my personal information.
Cookie SettingsAccept
Manage consent

This website uses cookies to improve your experience while you navigate through the website. Out of these, the cookies that are categorized as necessary are stored on your browser as they are essential for the working of basic functionalities of the website. We also use third-party cookies that help us analyze and understand how you use this website. These cookies will be stored in your browser only with your consent. You also have the option to opt-out of these cookies. But opting out of some of these cookies may affect your browsing experience.
Necessary Always Enabled
Necessary cookies are absolutely essential for the website to function properly. These cookies ensure basic functionalities and security features of the website, anonymously.
Functional
Functional cookies help to perform certain functionalities like sharing the content of the website on social media platforms, collect feedbacks, and other third-party features.
Performance
Performance cookies are used to understand and analyze the key performance indexes of the website which helps in delivering a better user experience for the visitors.
Analytics
Analytical cookies are used to understand how visitors interact with the website. These cookies help provide information on metrics the number of visitors, bounce rate, traffic source, etc.
Advertisement
Advertisement cookies are used to provide visitors with relevant ads and marketing campaigns. These cookies track visitors across websites and collect information to provide customized ads.
Others
Other uncategorized cookies are those that are being analyzed and have not been classified into a category as yet.
SAVE & ACCEPT
MEGA ELECTRONICS | (732) 249-2656